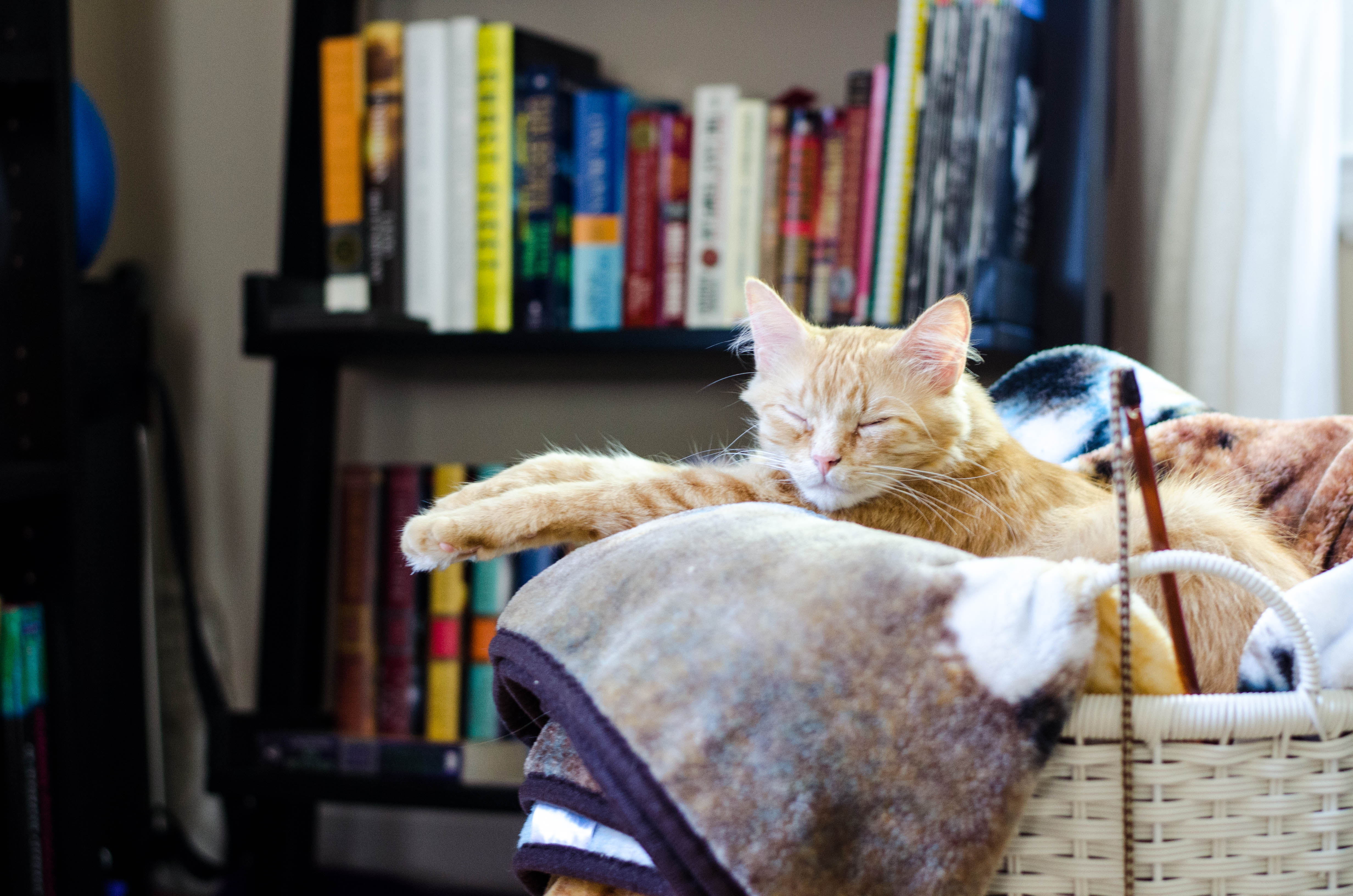 The only pets I’ve had in my short life have been a hamster and goldfish, and sadly, neither of those lasted very long.

It was really “Enter Tori,” since that’s how we found her at the local Petco one evening on a stroll to the library. She was at the store, up for adoption by the Dayton Humane Society. She immediately caught our eye because of her coloring and crazy amount of fur, and then were further reeled in by her tiny meows and attempts to be pet through the cage bars. She was friendly but unsure, and oh so beautiful. 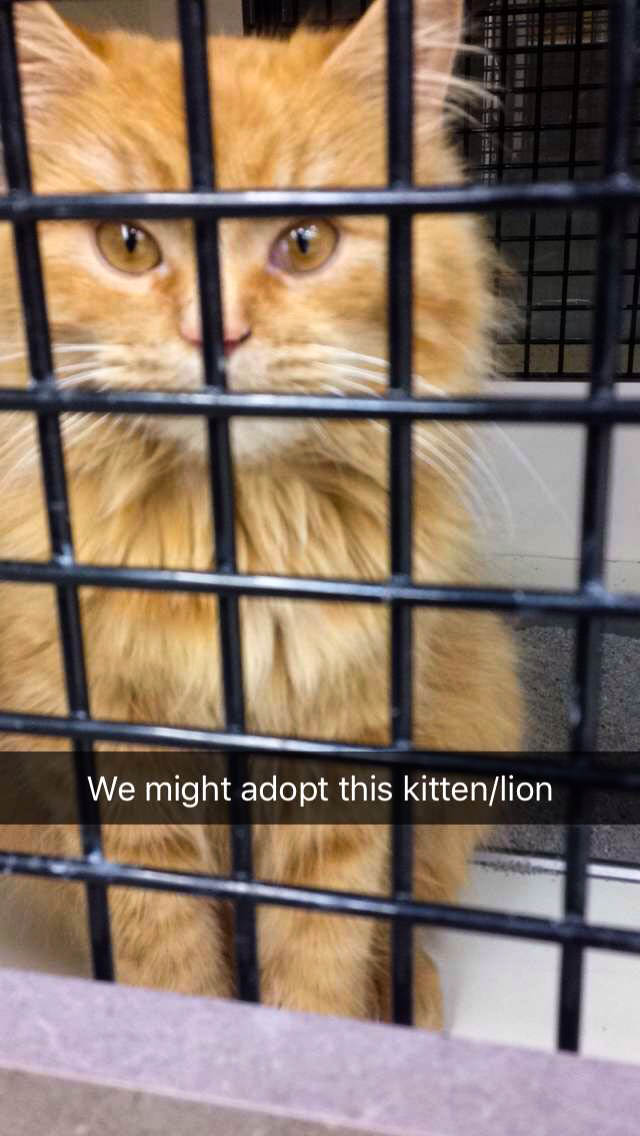 We talked about putting in an application, just to see if we’d get approved, and to go from there. This was definitely impulsive, but we had been talking about getting a pet for a while, and this little one just seemed like she could be a good fit. I wanted to think a little more and make sure we were ready, but we went ahead and filled in the application.

Ben had another idea; a sweet surprise – the next day, when I came home from a closing shift, this is what I was greeted with:

I had so much to learn, and it’s definitely been a process, but this sweetie has really become a part of our family. I can’t imagine life without her greeting me in the morning with a wet-nosed kiss and her tiny meows. If I’m in a bad mood, nothing cures it quicker than a cuddle on the couch with her silly faces and positions. And even just having her sitting at my feet as I write this feels so reassuring and perfect.

Is that food for me?

First visit to the vet!

Something’s cooking, probably for me, right?

Of course, it hasn’t been easy, per se. She is a handful. And it took her a while to feel comfortable around us, Ben especially. She used to run away at the sound of him walking into a room. She hasn’t yet totally learned the whole “don’t bite/scratch the hand that feeds you even as it is literally feeding you a treat right now” deal. And she can get a bit crazy. She LOVES sprinting around the room and up and down the stairs and going insane on her toy mouse. She will happily destroy any toy if you let her. And sometimes she tries to destroy our furniture in her crazed spells, but luckily has not been successful yet.

And she’s given us a few health scares, too. When we got her, she had a fairly big scratch on the side of her face that we didn’t know what to do with. She also was having some bouts of diarrhea, sometimes on the floor because she couldn’t get to her litter box in time… and her latest problem has been a sudden loss of fur around her neck, cheeks, and ears. We found an amazing cat-specific vet in the Dayton area, and he has been excellent in working through all of her issues. The scratch was actually more like a puncture wound, sadly, but he gave us antibiotics that cleared it up in no time. She was also on probiotics for a bit, which LUCKILY fixed the poo problem. And he put her on allergy meds to see if that would help with her intense scratching and fur loss, which has mostly done the trick. I can’t totally tell if she’s still having that issue, because she’s not scratching nearly as much, but her fur is (sadly) nowhere near to the fluff level it was when we first got her. She looked like a tiny fluffy tiger, and I miss that! Her health is the most important thing, but it’s still a little sad that she looks so different. We’ll be bringing her back soon just for a check-up to make sure she’s 100%. Fingers crossed!!!

Saoirse’s favorite past-times include: licking her butt, destroying her toys, staring out the window at birds, licking herself in weird positions, meowing a lot, staring at me while I cook, hunting bugs in the basement, trying to eat shoelaces, and sleeping upside down.

Welcoming me home from work

She decided that this would be a great place to sleep

And now, her newest favorite past-time is definitely watching Samson. 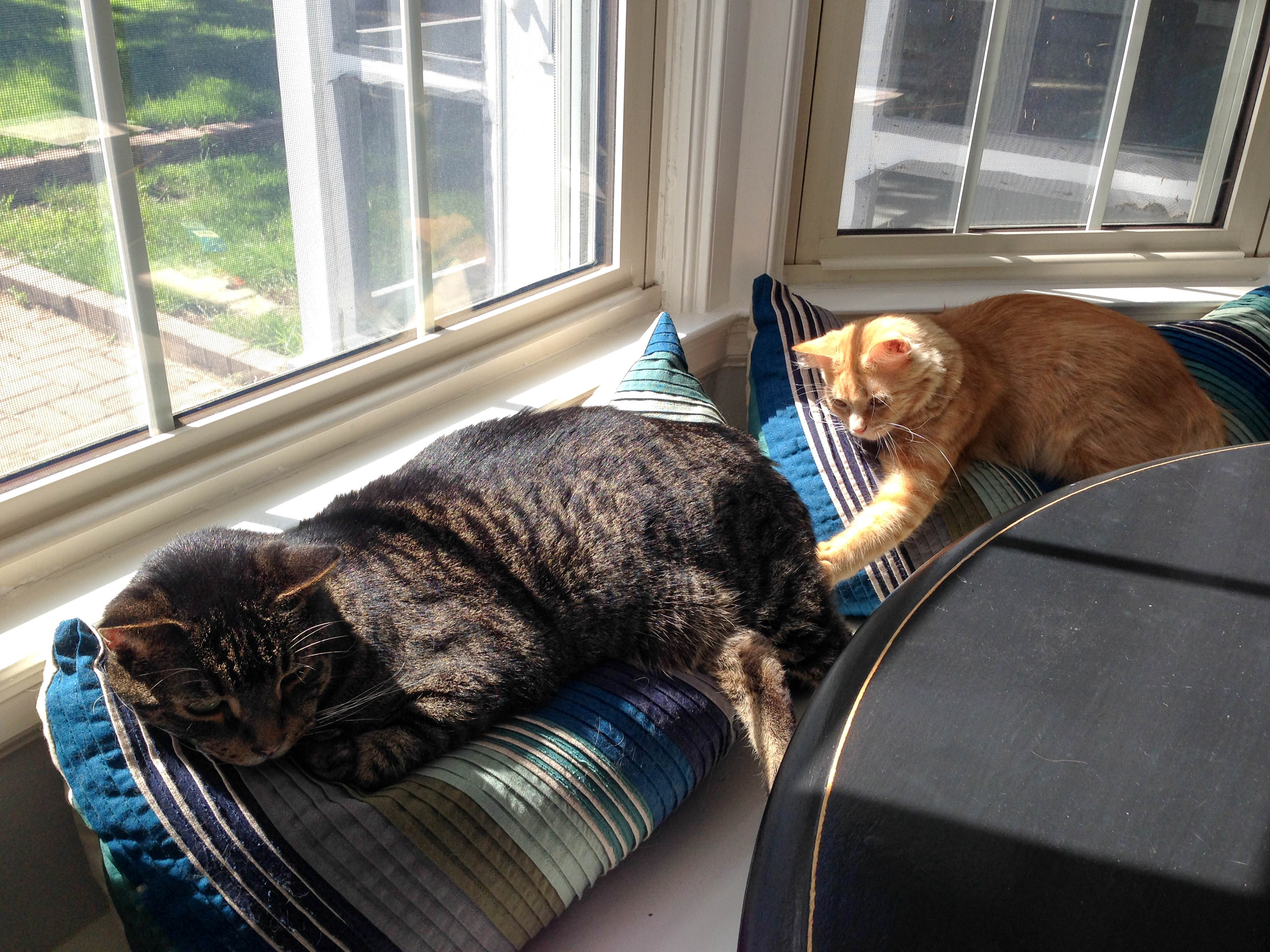 This basket is a new favorite spot for our cats

Sleeping in the bathroom on the first day

A beautiful, spur-of-the-moment decision that Ben and I made while visiting the Humane Society on his birthday earlier this month.

So enter Samson, originally Alfred and then Jose at the shelter, a 10-year-old dark brown tiger, who is juuuuuust a little bit bigger than Saoirse… just kidding, he’s like twice her size. He is one of the most chill cats I’ve ever met, and he’s missing some front teeth, so his tongue sticks out in a blep after he meows or eats. It’s freaking adorable.

The shelter let us do a “foster to adopt” scenario, where we had three days to take him home for free, and if it didn’t work out, there were no penalties. We chose to do this because we weren’t sure how he would fit in our household, and were definitely unsure how Saoirse, the queen of the house, would react to his presence. Answer: we love him, she is not so sure.

But she’s getting there…

The first few days were insanely stressful to me, with every interaction between the two ending in hisses and creepy growls from Saoirse. Samson, on the other hand, could not give a hoot and a half about her.

We separated them almost 100% of the time the first few days, with Samson reluctantly in the basement. The heartbreaking meows and scratching at the door made it so difficult! We fed them on either side of the door, swapped items with their scents, and let them peek at each other through a cracked door with supervision. Still, the hisses persisted, until one day, Saoirse seemed to realize that this big guy might not be trying to murder her.

At the same time, though, she also realized that OH HEY I CAN PLAY WITH THIS CAT and MAYBE HE WANTS TO PLAY and MAYBE IF I ATTACK HIM HE’LL WANT TO PLAY and OH MAN HIS BUTT SMELLS GOOD and WOW HIS TAIL IS FUN TO TOUCH. (I’m fairly sure that she would speak in all capitals if she could, seeing as that’s the volume of her meows most days.) And Samson is not a huge fan of that kind of attention. Who would really like to get jumped on every time they rounded a corner or to get swatted at when they tried to pee? Not most people, and probs not most cats.

So at this point, we’ve been having to separate them when it gets too aggressive or when the hisses come out again – this time, only Samson – and while I think Samson likes the safe haven aspect of the basement, he loves people and cuddling and just sitting in one spot for hours on end, so it’s also kind of torture. The sad meows are definitely torture to me and Ben. They did spend one night out in the open together, and took turns sleeping between me and Ben, which was wonderful.

Progress is being made, albeit quite slowly, but we’ll keep sticking to it. Any and all advice is welcome!!! We know we’re probably not doing everything right, because hey, these are our first cats, but we’re lovin on them plenty, feeding them good food (if I don’t want to eat food with carrageenan and meat by-products, why should they?), scoopin their poops, and doing the best we can. Fingers crossed for these lil sweet companions to stay happy and healthy for years to come.

NOTE: As I was doing final edits on this post, these two crazies both lay down at my feet under my desk to sleep. Very close to each other. With no hissing or fighting. And then the magic happened – Samson started grooming (aka loudly licking) Saoirse’s head and she LOVED IT and fell asleep. EVERYTHING IS GREAT AND PERFECT AND BEAUTIFUL.