As some of you may know, I’ve been relatively involved in LGBTQA+ activism since high school, when my amazing brave awesome wonderful sister Claire came out. I’ve been president of my high school’s GSA, marched in DC Pride with Metro DC PFLAG, and have been on the executive board of Wheaton’s LGBTQA Alliance since my freshman year. I consider myself an ally, while not a perfect one, and am always trying to learn more about the issues facing people who identify as LGBTQA+ and be a better ally. My mom is super involved with issues like marriage equality, and has been in charge of our church’s equality group for the past few years. She also helped to start a group for LGBTQA+ teens in our hometown of Arlington, VA, and is active in the Metro DC PFLAG circles as well. My dad is involved in this activism as well, and my sister is always helping me challenge my preconceived notions and learn more about issues in the LGBTQA+ community. I think it’s safe to say I have an awesome family.

I wanted to write all of that, not for “props” or to get recognition for anything, but to explain how much it means to my family that marriage equality was just legalized in our home state of Virginia.

My mom is already posting pictures from the Arlington courthouse, where gay couples are starting to get married, and she is posting up a storm on Facebook and Twitter. She’s more active on social media than I am!

(note: while I was writing this, an article popped up in my feed from the Washington Post – my mom is in a few of their photos!!!)

It’s nice to know that my sister now has the same rights as me, in terms of the ability to get married in our state. It’s just one small step towards equality; one boundary that we’ve crossed over.

There are countless other issues and rights that LGBTQA+ people are fighting for, and marriage equality is just one of them. For example, there are no laws in Virginia that prohibit workplace discrimination based on sexual orientation or gender identity/expression. Someone could be fired by their employer, just because of their (real or perceived) sexual orientation. I don’t think this shouldn’t be legal in 2014!

There are so many people working every day to help make changes around these issues, and they definitely don’t get enough credit! I’d imagine that working on issues like these in states like Virginia is pretty exhausting work, as it can take a while for real change to be seen in our laws and in the daily lives of LGBTQA+ individuals and families. There are lots of organizations that need our support, and if you’re feeling generous, take a moment to donate to their causes! 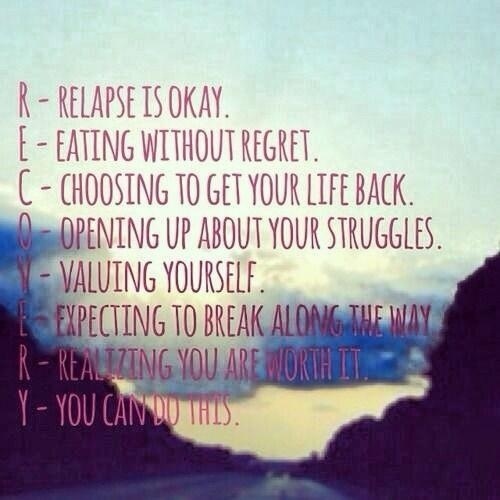 Courage doesn’t always roar. Sometimes courage is the quiet voice at the end of the day saying, “I will try again tomorrow.” – Mary Anne Radmacher

I have had a hard time defining what “recovery” or “being in recovery” actually means. At what point are you actually recovered? How long does recovery take? What do you have to do to recover? And what happens if you relapse?

I am in the process of recovering from my eating disorder. This isn’t something I usually open up about or broadcast to the world, and I know that it’s not something that I’ve told even my closest friends about. So why write a blog post? This blog is a way for me to get out feelings and thoughts that I don’t know how to express otherwise. My eating disorder is an incredibly personal thing that has been a source of internal shame for a long time, and keeping a shroud of silence around it is going to do nothing to help push away those feelings of shame and disappointment. It’s something that I’ve always wanted to talk about, and always wanted to tell people about, but I haven’t figured out a way to do it before. I’m the type of person who is worried about what other people think about me, and coming out as having an eating disorder puts me out there for a good deal of judgement. Just by looking at me, you could never tell that I’ve been dealing with an eating disorder since freshman year of high school. Too many other girls and women are feeling the same shame, frustration, and confusion that I have felt for the past 6 years, and talking about it is the only way that I know how to help others.

END_OF_DOCUMENT_TOKEN_TO_BE_REPLACED

I’m not one to typically “rebel” against Valentine’s Day or any other holiday like that, but I do think that the pressure on everyone, single people and couples alike, to have a certain type of experience on this holiday can be a little ridiculous.

Society sets up single people, women especially, to feel like they have to have some strong emotion on Valentine’s Day, like being upset and depressed that they don’t have a partner, or like they should be angry at the holiday for simply existing. Couples, on the other hand, are sometimes pressured to put out this great big outward show of their love and dedication to each other, which often means that someone needs to buy something (flowers, jewelry, dinner reservations, candy, etc.) expensive. People in my generation are often expected to post a sweet Instagram photo on Facebook that expresses to the world how much they truly love each other. This basically equates the “level” of their love for each other with how much money they have/are willing to spend on each other, how creative they get in their surprises, and how many likes they can get on their post.

Basically, it frustrates me that a holiday that is capable of bringing people love, joy, and happiness is also capable of delivering shame, frustration, stress, and sadness to many, many others. Tell your loved ones how much they mean to you, express it any way you can, but don’t let the value of their love be influenced by the value of the physical items they are able to give to you. Love is about so much more than a dozen roses or a box of chocolates.

So with that, I think that Liz Lemon puts it very nicely: a very happy Anna Howard Shaw Day to us all!